Once upon a time, I fell in love.

And god, she was beautiful: tall, long-legged, and an amazing sense of humor. Her red hair was the color of a sunset, and falling asleep in her arms was heaven.

The problem was she was my mother, so marrying her and spending the rest of my life with her was a long shot. So that meant I had to find “the one” on my own. The problem is that I was never convinced there was “one” out there for me. Simple statistics means it’s pretty improbably that out of all the billions of people on the planet, there is only one who is ultimately compatible with me, and I’m on some sort of search for her.

It’s like Quest for Fire, only for a girlfriend.

So, I came up with an analogy for what I was doing with my approach. Because of everything I was doing, the one thing I didn’t want to do was to waste time in dead-end relationship or dating women who just weren’t right for me. I’m thankful for all my experiences, but I was always a little goal oriented. So I imagined that each date I went on, each failed relationship, was analogous to me painting a portrait of the woman I’d fall in love with.

Each person in my life added a brush stroke or two to the portrait.

And I figured that if I had enough brush strokes on the canvas, then I’d recognize her when I saw her. That’s a great romantic ideal, but I’m not sure that analogy makes much sense, either. But what it did do was give me something to think about when it came time for me to decide “do I stay and fight for this, or is it time to pull up stakes and go?”

How on Earth do I know when to fight for something?

You know, there really are two answers to that question: macro and micro. I’ll start with the first. 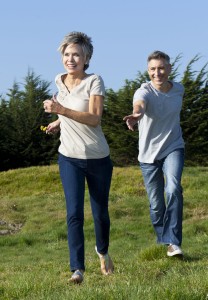 It also allowed me to stick it out with some relationships that might have ended too soon had I not know it was someone worth fighting for. Because the truth is, not every relationship is for a lifetime, but each relationship has something to teach me, and I want to make sure I’m there long enough to learn my lesson. That also sounds mercenary, and it isn’t. If I back off and just focus on being in the moment, then I’m not worried about the long-term. I’m here and I’m present. It helps me recognize when I’m good, and it helps me recognize when things are off. And when things are off for enough “moments,” I am confident enough to not fight for something that isn’t healthy for me.

Last night, I asked my partner what she thought of that question: How do you know what to fight for, and her answer surprised me. She said simply that if she met someone new, she was looking at his entire life; wondering if she could picture herself folded into his life.

To illustrate the point, she used the example of her ex. In this case, he is someone whose life revolves around counterculture events like Burning Man. He hosts house parties where alcohol is the centerpiece. And wine and fine dining are the cornerstones of his life. There’s nothing wrong with any of those things, other than the fact that my partner is sober. So when she looked at her ex and saw the life he leads and the social circle he’s constructed, there simply isn’t room for her in it. There’s not a logic to weaving herself into that existence.

So that’s the macro. Is it worth fighting for? There’s no real formula, but it starts with knowing yourself enough to know what you want and how you would fit in with a potential partner. The more yesses that appear, the more worth the fight it really is. And ironically, that’s how I’ve managed to stay fighting for my partner, through her own battle for sobriety and personal growth. I can see a future with her. Is it my only future? Absolutely not. But I like the one that could develop. And that makes that life well worth the effort right now.

But that still leaves the day-to-day decisions about what is worth fighting for and what is worth walking away from. And one of the easiest things I do is to just stop and think before I speak. When a situation arises, such as her using something to push me away or to create distance, I stop and really question my motives.

Is this something that really has to be said?

Is it something that has to be said right now?

Am I the person who needs to be the one to say it?

Those three questions have saved me so much hassle and headache. Because when I start worrying about saying the things that aren’t necessary to say, or that aren’t required for me to be the one to say them, then I avoid the unnecessary conflicts when I’m just trying to be right, prove a point, or convince her of something. Rather than jumping into speech, I’ve learned to keep my mouth shut, which is a tall order for someone who makes a living with words.

But it’s a lesson important enough not only to learn, but also to practice. And if you think about it, I have time to think about it day in and day out, not only in my romantic relationships, but also in my platonic interactions. I can’t describe how much I’ve alleviated stress just by learning to listen rather than trying to solve every problem around me. And I got there by finally admitting that not everything is my responsibility. Absolved from problem-solving duties, I am free to let other people fix their own problems, which means far fewer disagreements and arguments.

When there is an argument, I’m much likelier to be expending that energy on an issue that is truly important, such as figuring out a budget, or expressing my emotional needs or wants, or deciding who is doing dishes that night. The big stuff like that.

In the end, it’s down to the individual to decide how to manage the fight instinct. But management is healthier for everyone involved. And that kind of peace of mind along with less conflict is something truly invaluable.

Robert F. James is a lecturer in creative writing at San Jose State University. He’s been a professional writer his entire adult life, and his writings primarily focus on the challenges of modern masculinity. He lives on a small hobby farm in the Santa Cruz Mountains of California, where he raises chickens, rabbits, and ducks while managing a small garden. He’s been a Sailor, a pastor, a television and radio personality, and a professional piercer. His eclectic background lends itself to an exploratory aspect of his writing. His work is an authentic reflection of the issues he puzzles over on a daily basis, and he spends a good deal of time outdoors to process them. A large herd of deer on the property seem to respond favorably to his ramblings.

Not sure if coaching is right for you?

Note that this is not a call-in advice or chat line. The focus of our initial call will be answering questions about my coaching service, and scheduling your first session if you decide to move ahead.